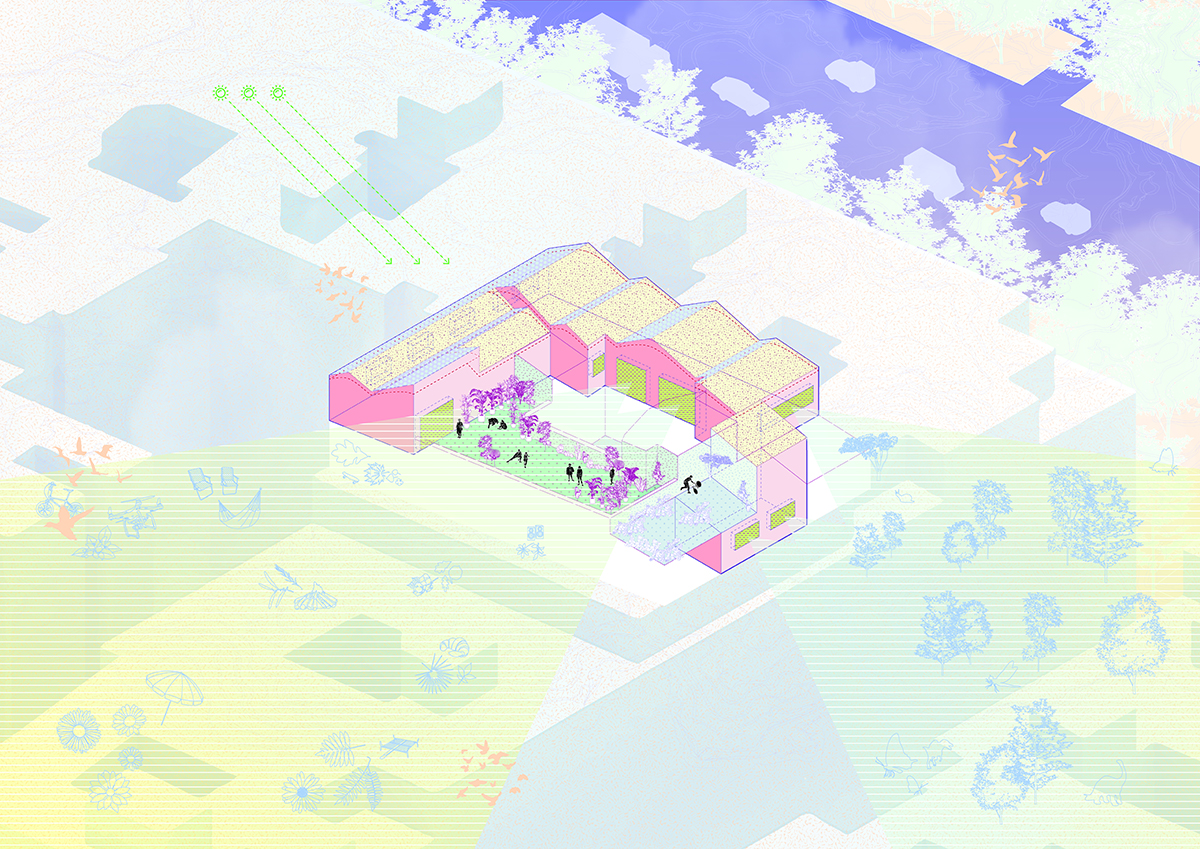 Rehabbing a top-floor apartment on the edge of the city

This is a proposal for an ecological retreat. A middle-aged couple plans to start a new life in the near future. With that aim in mind, the idea is to refurbish an old warehouse located on the roof of a residential building in Madrid, to put into practice a new life stage alternative to their present lives. A retreat, on the very edge of the city, where they can practice the art of knowing how to live. A way to escape from the rules that have governed their lives so far, but without giving up the urban bustle. An attempt to live outside many of the social ties that have bound their daily lives, but from the "inside".

The intervention strategy on the pre-existing structure begins with a folded plate roof that completes the enclosure of the whole ensemble, modulating and characterizing the different domestic spaces. This roof replaces the old, very deteriorated one, and is two-sided. The outer side is folded in inclined bands, according to an energy geometry by optimizing the angle of production of photovoltaic solar energy, increasing the surface area of capture and facilitating the opening of skylights at specific points for natural lighting and ventilation. The inside is an arrangement of rows of vaults, which softens the folded geometry, qualifying the different environments and adjusting the scale of the rooms. The chamber between the two sides will help to insulate and regulate the ventilation. Meanwhile, the floor plan will solve the differences in levels of the pre-existing space, generating sunken areas signify the storage points and spaces.

The 'L' –shaped floor plan of the old warehouse is arranged around a core in the corner that concentrates the wet areas and the service elements, graduating the intimacy of the rest areas. The entrance is located in the front part, by means of a periscope stair that takes advantage of the views outside. The terrace opens onto the panorama of an urban forest. The living room is arranged around two main elements: a lower area next to the fireplace and an open kitchen, providing a generous space for leisure time. The bathing area is divided into different elements, articulated by the ceiling vaults and skylights. The bedroom, located at the end of the house, has an access onto the roof of the building that will serve as a courtyard-garden where users will practice their fondness for xeriscaping and situate the composting unit.

An energy strategy minimizes the consumption of resources as well as CO2 emissions (both in the construction process and during operation), avoiding overheating and favoring cooling, ventilation and shading techniques in summer. The objective is to achieve an efficient domestic space that is fully off-the-grid.

More than a century and a half after Thoreau’s experiment in Walden, these new "urban explorers" plan to set in motion another type of ecological experience: the construction of a domestic space where they can explore the ecosystemic dimension of pleasure and other forms of communion with the environment, escaping the representative dimension of suburban life or the literality of retreat in the countryside. In a context where virtually the entire world is urbanized, Walden Den will host a home experiment for this kind of hermit-like retreat that is, at once, luxurious; stoic and hedonistic; secluded and close; ecological and desirable; isolated and in community. A way of inhabiting (on) the edge.

1. Rehearse the future. Design your own future as an architectural experiment: imagine other forms of life, define new limits, rewrite vital scripts.

Architecture is a science of fiction.

2. Ecological retreat. A cabin in the city. A refuge in the urban forest.

To live in communion with nature, but in a non-literal way.

3. Ecology of the everyday. An exercise in reflection on the need to both preserve the environment and question our own reality, from the micro scale.

4. Towards a nearby distance. From an ecosystem perspective, dichotomies such as "in / out", "near / far", "private / public", etc., cease to be operative. You can be outside, being inside. And vice versa.

To inhabit the limit.

5. Urbanized world. In the same way, the "nature/nurture" dialectic has long since ceased to be operative.

In the words of Toyo Ito: "The city is a garden of microchips".

6. Energy geometry. The roof adapts to the pre-existing heights, reorganizing the whole with a new geometry that integrates photovoltaic solar panels in an optimal position. The inner face is resolved by a series of domes.

7. Panorama to look at. For Thoreau, wealth should be measured by the number of things one can look at.