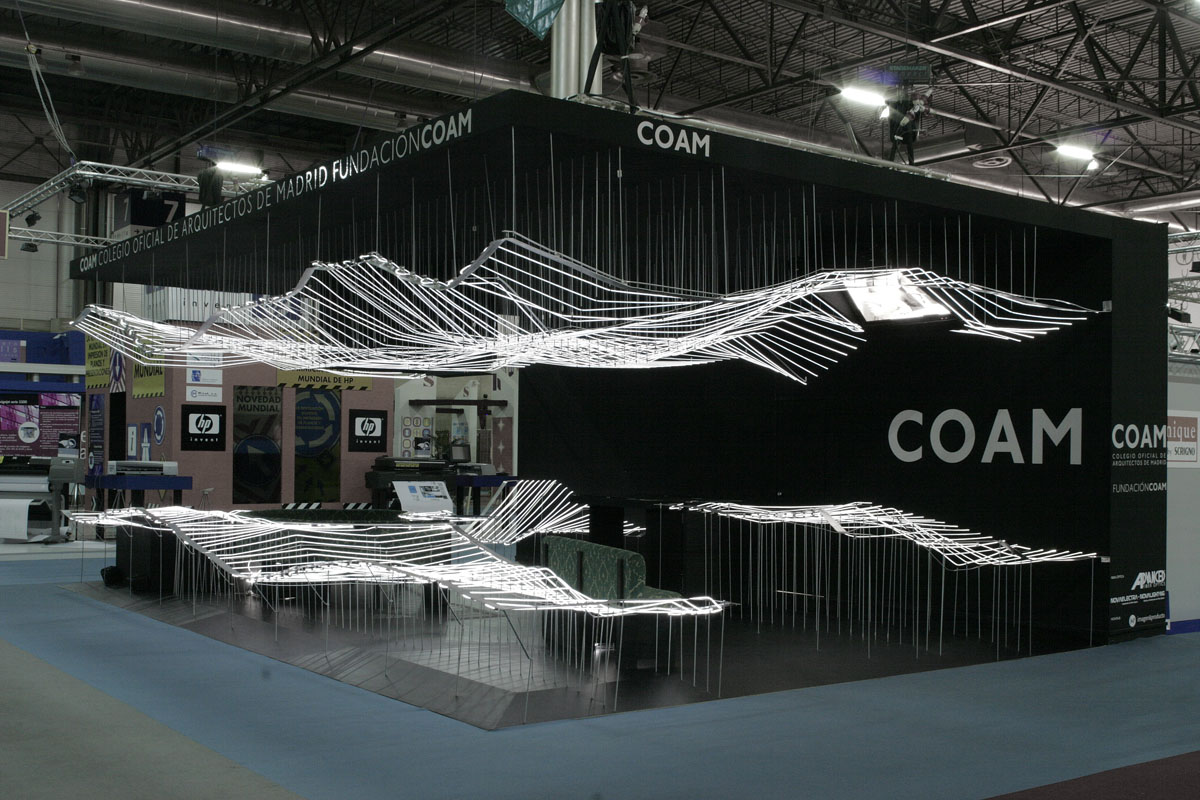 Stand for the College of Architects of Madrid (COAM), Construtec Fair 04

*Award of the Official College of Architects of Madrid “A la Obra bien hecha”. 2006

In 2004, the Official College of Architects of Madrid (COAM) issued a tender for the design of its stand for the Construtec ‘04 business fair. The presence of COAM in this sort of business fairs is merely representative, as, given its nature as a Professional College or Association, it does not sell construction products, dealing only in information. Elii’s winning bid designed a room that served as a meeting point for architects. The stand was defined as an inside space, a drawing room to receive visits, a room presenting visitors with the best Architecture has to offer: a spatial experience.

The Project makes the most of the pavilion’s artificial lighting and defines its space by means of a play on lights. The stand is made up of a single element, artificial light: the space is developed between two fibre optic surfaces which absorb the functions and adapt to the program required by the institution, creating a vibrant and live space made of light which stimulates the visitor’s perception. For instance, upon leaving the stand to continue visiting the fair, one will experience an alteration of colours, as, after a certain amount of time spent in the stand, the chromatic reference of the visitor will have adapted to the new variables found inside it. The optical fibre changes colour gradually in a cycle imperceptible to the visitor’s eye. After a while, the space will have transformed around the visitor. Finally, as there is no real perimeter, the space between both surfaces, made up of parallel rails, offers an open horizon. However, due to it being situated against the light, visitors will not be able to see outside the space, experiencing the feeling of being immersed in a closed space with non-physical limits. Walls of ligh have effectively been created.

This project won the 2005 FAD Opinion Award and the Award of the Official College of Architects of Madrid “A la Obra bien hecha” (To a job well done”) in 2006.

1. Enclosure. The context – Pabellón 7, Recinto Ferial IFEMA, Madrid- is a place with few attributes. The project defines an enclosure, an interior, a meeting point in which the association of architects can gather and receive visits.

2. Air quality policies. A pavilion in a fairground is an artificial space of air. The goal consists in designing a portion of air and charging it with intensity.

3. Alteration of perception. The surfaces of fiber optic lines build a living space where the visitors' chromatic referent gets adjusted to new color variables that stimulate their perception. After a while, the vision gets accommodated. When leaving the stand to continue with the fair, the visitors start to experience an alteration of the surrounding colors.

4. Light walls. Despite having no walls, once inside, due to the backlit effect, the visitor has the impression of being protected by an enclosure just built with light: a non-physical limit that favors the feeling of limit, of room, of immersion, of ambient.

5. Changing space. The fiber optic changes its color in a cycle of imperceptible transitions. The user enters a blue space, but abandons a fuchsia enclosure.

6. Identity. The COAM does not exhibit nor sell any construction product, but manages information and performs relationships. The COAM must show a unique institutional space.