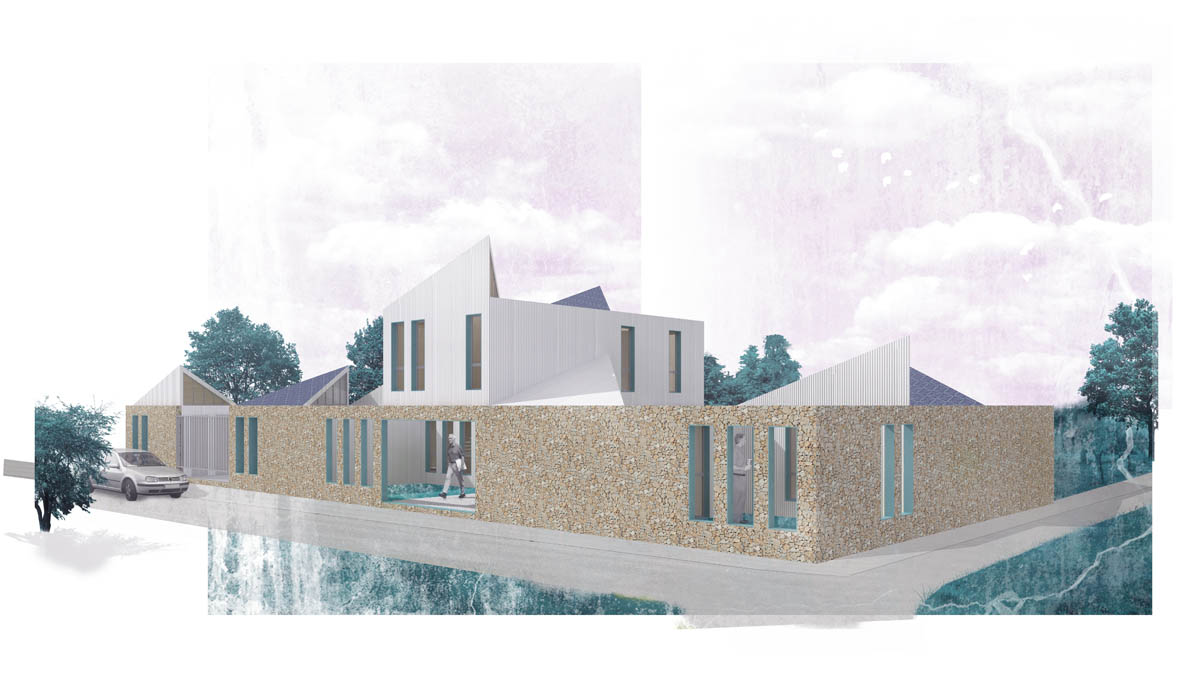 The invitation to the competition called for the construction of a New Maintenance Centre for Red Eléctrica de España in the middle of a rough terrain in Santa Ponsa with nothing but a few nearby buildings. The project revolves around three main strategies:

(1) Resource implementation and management. The former is based on the reformulation and update of some of the traditional implementation formulas in the region. For instance, the building reuses the stone fences of the traditional structures of the island, such as talayots, to define the physical boundaries of the project, thereby integrating a modern space connected to an infrastructure programme within an extraordinary environment such as that of Calviá. The proposal also incorporates the traditional water collection system by means of tiles. This technical principle is translated into the geometry of the roof, which collects the rainwater and channels it to cisterns installed in the courtyards. The building itself is thus configured as a water treatment unit. Finally, the geometry of the roof allows high spans to be opened in the work rooms to capture the uniform light from the north.

(2) Programme and organisation. After painstakingly studying the programme, the proposal was configured around courtyards that are interconnected by a central circulation core, resulting in a systematic and economical development that is also flexible. The more technical rooms are separated from the offices. The green spaces of the courtyards double as rest areas and provide views for the rooms, while also allowing cross-ventilation. A main body with the most representative programme emerges from the whole, indicating the entrance.

(3) Future phases and smart geometry. The proposed layout allows the building to be extended and densified for potential future adaptations of the programme. Besides, the sloping roof faces south, so solar photovoltaic power may be installed at a later stage to optimise resources. This geometrical variation is transferred to the inside, enriching the space of the work areas.

The complex proposes a strategic and functional solution that suits the presented requirements, while consolidating the corporate image of Red Eléctrica de España, as set out in the terms of the competition.

1. System. The band system is like a music score: it allows different ‘compositions’ of spaces and programmes.

The rules of the game allow different plays, tactics and strategies.

2. Reformulating imaginaries. The updating of the techniques allows the development of a contemporary programme connected to the infrastructures of this landscape.

Techniques for the updating of the shared imaginaries.

4. Resource management. The proposal intervenes in its surroundings on different levels. Beyond the figurative plane, the project manages the resources to optimise their implementation in the environment.

Place can be said in a plurality of ways.

5. System adaptations. The proposal allows the programme, functions and spaces to be adapted to future requirements.