Getting in shape at home! 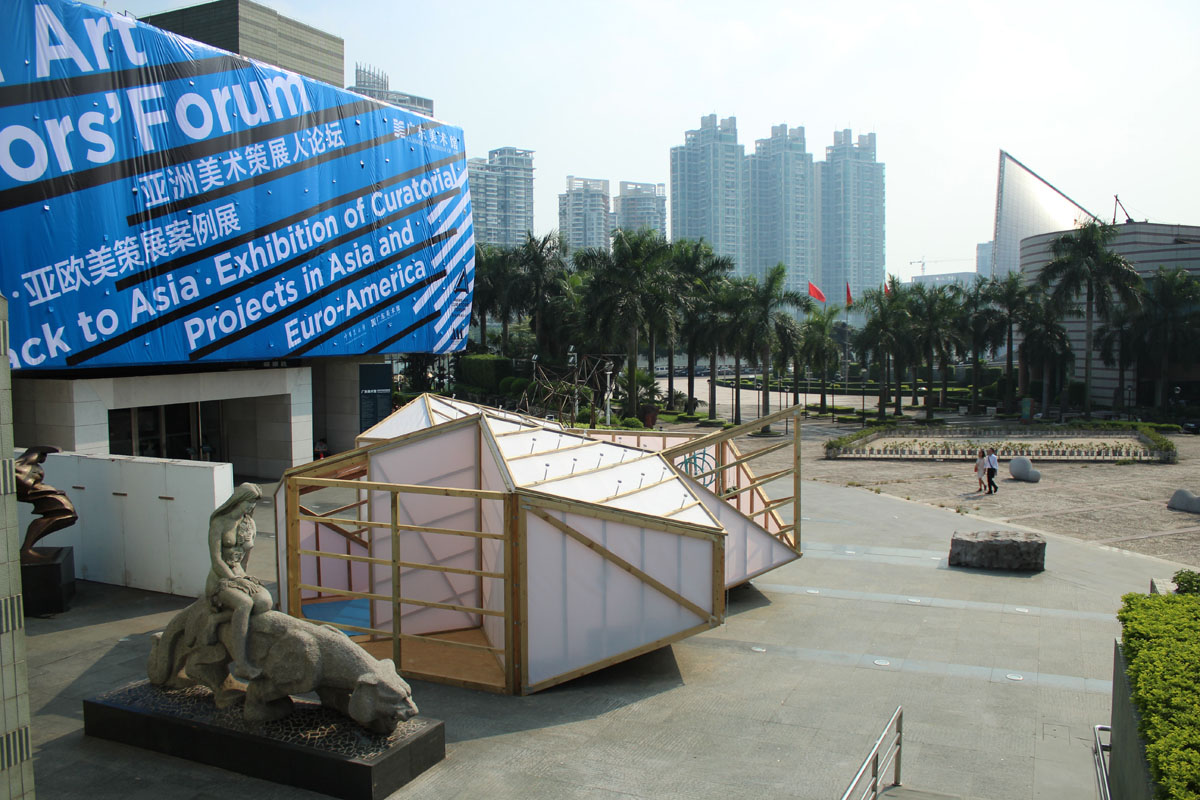 This is the second version of the JF•Kit House prototype. Prior to this, it had been built in the CIVA (Centre International pour la Ville, l'Architecture et le Paysage) in Brussels and it has now been submitted to the 2013 Asian Art Curators' Forum in Guangzhou, China.

The JF•Kit House is an experimental house where the inhabitants cover most of their power supply needs by means of physical workouts. The project takes a political scenario, in this case sustainability, to the extreme to evaluate how domestic spaces and their rituals, as well as the bodies of citizens, are transformed in an ‘off the grid’ context (disconnected from infrastructure networks).

There are four levels to the JF•Kit House GZ project:

- Urban level. Light and pre-industrialised architecture that can swiftly colonise a dispersed city’s fabric to increase its density.

- Architectural level. Exploring the transformation that architecture undergoes when new power management technologies and infrastructures are integrated and the focus shifts from supply networks to local generation.

- Financial scale. Financing the house with a ‘green’ product: ‘energy efficient mortgages’, that allow the profit gained from the self-generation of power to be subtracted from the mortgage payments.

- Social-cultural level. Exploring the new rituals and uses for space in the political bodies of the citizens.

The JF•Kit House GZ explores the rhetorical and controversial aspects of architecture. Its purpose is not so much to provide a closed-form solution, but more likely to stir up social debate. If sustainability causes a cultural transformation, the whole of society needs to discuss what it wants that culture to be like. The JF•Kit House GZ explores the controversial aspects of architecture, it participates in the debate by giving material form to a possible future in the shape of an architectural prototype, so that citizens can live it, inhabit it and discuss its feasibility. It is an architectural political fiction that is open to debate and evaluation.

How would you conceive a space that generates power instead of being simply an infrastructure terminal supplied from the outside? What are sustainability architectures like? What bodies are required to inhabit a sustainable and self-sufficient future?

1. Sustainability architectures. The purpose of this proposal is to imagine what the architectures that would allow a sustainable future would be like or, more specifically, to imagine how the domestic spaces and the bodies of the citizens would be transformed in an ‘off the grid’ scenario.

Sustainability is not (only) a technological solution. It is (above all) a cultural shift.

2. Prototype. This proposal brings to life one a prototype of one of these sustainability architectures, the JF•Kit House GZ, so that it can be experienced on a 1:1 scale and thus inhabited and evaluated.

Instead of closed-form results, open prototypes that allow processes to be intervened and informed.

3. The museum, the laboratory. The museum is not only a space for exhibitions, but the testing ground for languages, discourses, actions, etc. Experiencing instead of showing.

The museum is a laboratory.

4. Production. The project looks into the transformation of architecture when it ceases to be a power terminal and becomes a power-generation point. For instance, roofs are oriented in such a way as to integrate solar photovoltaic power, and furniture integrates household functions and exercising equipment.

Spaces for generation instead of spaces for consumption.

5. The body, the battleground. Vegetarianism shows that the body is a crucial political arena for sustainability. The JF•Kit House GZ (Jane Fonda Kit House, Guangzhou) analyses the transformations that the bodies of citizens would undergo if they had to be relied upon to generate power for the house through workouts.

In the words of Barbara Krugger: ‘your body is a battleground’.

6. The potential of fiction. In this laboratory, as in all laboratories, experiments are taken to the limit. The project takes the hypothesis of self-generation and the off-the-grid status to the extreme to evaluate the consequences of this possible future and decide whether that is what we want. Is a future based on the Jane Fonda model of citizenship desirable?

Fiction as a forum for discussion. Architecture as a genre of rhetoric.